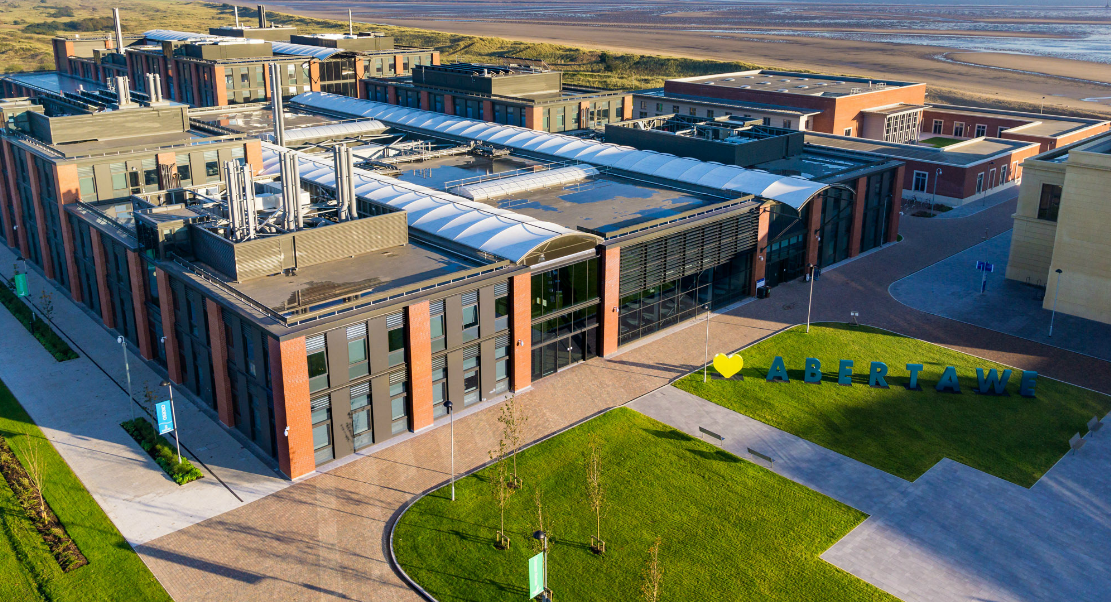 Swansea University is a research-led university that has been making a difference since 1920. The University has recently enjoyed a period of tremendous growth, and in 2014 achieved its ambition to be a top thirty research University (2014 REF). An ambitious Campus Development Programme is currently underway at Swansea - one of the largest knowledge economy projects in the UK and within the top five in Europe - involving a brand new £450m campus and the transformation of their existing Singleton Park Campus.

Situated on the Gower Peninsula, students have 19 miles of dramatic and picturesque coastline to enjoy, whether it’s a relaxing read or something more adventurous. Within a few miles of campus, you’ll also find the wild, mountainous beauty of the Brecon Beacons; mediaeval castles and historic monuments; the Vales of Afan and Neath; and Carmarthenshire, known as the Garden of Wales.

The city of Swansea offers modern and cosmopolitan living, with its waterfront development and cafe quarters. Choose from a variety of pubs, clubs and bars on Wind Street or attend sporting events and pop and rock concerts at Liberty Stadium.

The University's foundation stone was laid by King George V on 19 July 1920 and 89 students (including eight female students) enrolled that same year. In 1921, Dr Mary Williams became the first woman to be appointed to a Chair at a UK university when she became Professor of French language and literature. By September 1939, there were 65 staff and 485 students.

In 1947 there were just two permanent buildings on campus: Singleton Abbey and the library. The Principal, J S Fulton, recognised the need to expand the estate and had a vision of a self-contained community, with residential, social and academic facilities on a single site. His vision was to become the first university campus in the UK.

By 1960 a large-scale development programme was underway that would see the construction of new halls of residence, the Maths and Science Tower, and College House (later renamed Fulton House).

An ambitious campus expansion and development project is now underway, ensuring that Swansea University will maintain its momentum, and continue to work for the benefit of the city, its people and industries.

Swansea is divided between two campuses:

Swansea was the first campus university in the UK, and its friendly, close-knit appeal encourages a welcoming and supportive community.

Set in 46 acres of parkland two miles west of Swansea city centre, Singleton Park Campus houses the colleges of Arts and Humanities, Human and Health Sciences, Medicine, Science and Law. The campus, revolving around Singleton Abbey, a large 19th Century mansion built in the neo-Gothic style, is also home to the students’ union, some of the University’s accommodation, restaurants and shops, and libraries. The campus lies on the eastern approach to the Gower Peninsula, the UK’s first Area of Outstanding Natural Beauty.

The 65-acre, £450 million beachfront science and innovation Bay Campus opened up in September 2015 and houses the College of Engineering and School of Management, the Great Hall auditorium and a new library. It lies three miles east of Swansea city centre.

Swansea offers students a year abroad and a semester abroad. The University has partnerships with 17 European countries with the Erasmus scheme and other countries such as the USA, Canada, New Zealand, Australia, China, and Hong Kong.

Swansea also offers international internships in countries such as China, India and the USA in both multi-national companies and SMEs.

Swansea's Excellence Scholarships of £3,000 are awarded to all students who achieve AAA at A-level or equivalent.

Swansea's Merit Scholarships of £2,000 are awarded to all students who achieve AAB at A-level or equivalent.

Swansea’s library is located at the heart of the campus, boasting over 800,000 books, journals, newspapers and other printed materials, as well as videos, DVDs and a wide range of software applications. They also provide 450 PCs; a range of silent and study group areas; dedicated facilities for students with special needs; photocopiers, scanners and printers; and courses on how to make the best use of the services and resources available.

There are over 1,900 PCs for student use at Swansea as well as a wireless network.

The £1.4 million 360 Beach and Water Sports Centre is the only university-operated centre of its kind in the UK. A  five-minute walk from the Singleton Park Campus, the centre, which opened in Autumn 2012, is a not for profit company set up by Swansea University offering a range of activities and training such as kite surfing, paddle boarding, kayaking and beach volleyball. It houses a beachside bistro open to the public.

The university runs an “Elite Athletes” scholarship scheme, and there are also modern, well-equipped labs that allow researchers to provide world-class support for elite sporting teams.

Within Swansea’s campus there are a number of facilities including shops, the health centre, a dental surgery, bars, a Post Office, restaurants and a book shop. The University also boasts the Telieson Arts Centre, which hosts a broad programme of events including cinema screenings, visiting exhibitions and live performance from dance and drama to jazz and world music, and the Museum of Egyptian Antiquities.

There are plenty of media opportunities for students including the student newspaper, Waterfront, the student magazine, Front, and Waterfront Online website. There is also a student radio station, Xtreme, based on campus with a live and recording studio.

Swansea has a strong campus-based student community, so there is always events and activities going on. The Students’ Union support over 80 societies, and 40 different sports clubs.

Students can also be involved in varsity sports, seeing Swansea and Cardiff universities competing in over 20 different sports. The competition culminates in a showpiece rugby match with proceeds going to charity.

The campus-based Chapliancy Centre is provided by a team of six chaplains who work together to support the spiritual life of the University community. Swansea is one of the few universities in the UK to have a mosque on campus, and in 2007 won the UK’s Best Mosque Provision award from the Federation of Islamic Students.

The University’s Disability Office offers support include access to an Educational Psychologist to undertake assessment for those who suspect they are dyslexic; arrangements made for alternative exam provision e.g. extra time; access to in-house support schemes, such as readers and note-takers; liaison with academic departments; liaison with external agencies, such as RNIB and RNID; IT training in both mainstream and specialist-software packages; IT technical support; and support for those with mental-health difficulties.

There is an NHS medical practice and a dental surgery open to students on campus.

The University’s Wellbeing Services is available to support students who experience any form of distress. The service includes wellbeing advice and coordination as well as counselling. The support offered is flexible and designed to suit the particular needs of the student and may involve liaising with Academic Colleges/Schools to help ensure any reasonable and appropriate adjustments are made. They also run a series of workshops covering various topics including self esteem, assertiveness, anxiety, and relaxation, and therapeutic groups with past sessions including mindfulness based cognitive therapy.

The University also supports people in entrepreneurship, with students being able to take part in seminars and workshops from inspirational guest speakers from the private sector; attend masterclasses to see how the most successful entrepreneurs run and grow their businesses; study entrepreneurship and employability modules; attend a Summer School programme to develop enterprise skills such as business planning, and finance and business law.

Students can also get involved in Discovery, the student volunteering programme, where they can get involved with a wide range of projects across the City of Swansea, and experience working with some of the region’s most disadvantaged groups.

Swansea has nine residences on campus either self-catered, or part-catered where residence fees include one meal per day via a credited dining card.

Students can also choose to live in the Henderfoelan Student Village, approximately two miles from campus, with accommodation for around 1,600 students. On site, facilities include Woody’s bar, a convenience shop, a fast-food outlet, and a hard surface sports pitch. During term time there is also a bus to the university campus.

Most academic departments will ask for an IELTS score of 6.0 (or equivalent) for undergraduate degrees.

The International Development Office has scholarships available to candidates who can demonstrate above average academic qualifications and/or financial need.

The university also has an International Crisis Fund to provide emergency assistance for international students who face financial difficulties not anticipated at the start of the course, and not within their control.

Swansea University is a global university attracting world-class staff and around 2,000 international students from 120 countries.

Swansea’s International Student Advisory Service offers a resource service where international students can find out about issues such as working in the UK, driving, healthcare and obtaining visas to travel to other countries.